Video: One of Toomer's Oaks set on fire after Auburn's win over LSU 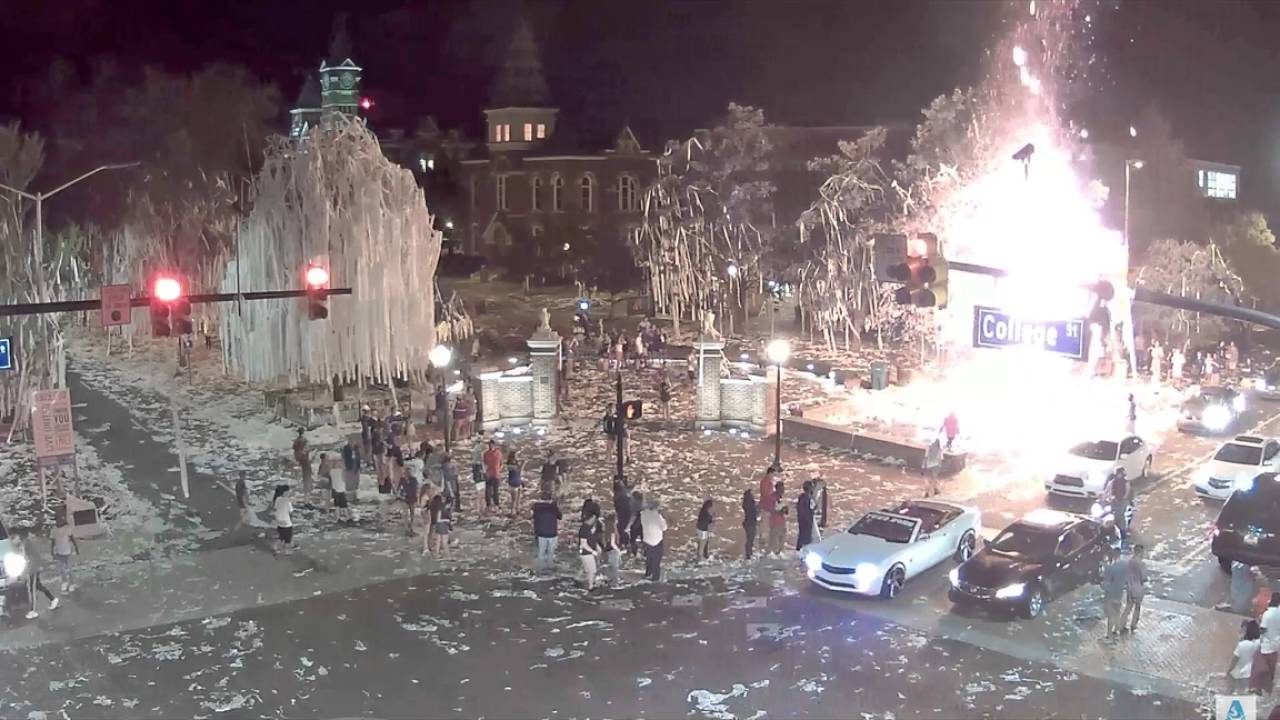 AUBURN — One of the oak trees at Auburn’s famous Toomer's Corner was set on fire early Sunday morning just hours after Auburn won a football game.

The tree, which is the one nearest College Street if you’re looking at it from the middle of the intersection of College and Magnolia Avenue on the campus of Auburn University, was fully engulfed to the top for not more than a few minutes until the local fire department arrived on the scene.

Surveillance footage from a camera pierced atop the intersection shows someone lighting the toilet paper already on the tree on fire and then walking away. Police officers on the scene refused to comment on how the fire started or if there was a suspect but Auburn city police chief Lorenza Dorsey is expected to release a statement on the matter Sunday.

Auburn Fire Department Station 1 Battalion Chief Dow Sport confirmed to the Opelika-Auburn News that the call was received at 12:16 a.m. and the station responded at 12:17 a.m. According to the statement given by Sport, the Auburn fire department was on scene for 30 minutes and there were no reported injuries. The station building is just a few blocks away from Toomer's Corner so fire department officials were able to quickly put the blaze out but not before the tree was engulfed with fire up to the top branches. Afterward, the square block surrounding the trees and its roots was soaked with water as fans gazed at the damaged tree and some fans attempted to re-roll the tree after about 30 minutes following the fire department leaving the scene.

Due to the darkness of the time period when the fire took place, an accurate assessment to the damage of the tree is unknown at this time but it’s anticipated that Auburn’s horticulture department officials will assess the situation in the coming days. None of the other trees in the area were damaged.

Auburn officials temporarily halted the tradition in 2013 as a result of the original oaks being poisoned in 2011. However, after a three-year hiatus, the tradition of covering the oak trees with toilet paper after Auburn wins was restarted this fall with the newly planted trees.

Harvey Updyke, an Alabama fan, admitted to poisoning the trees but in fact bragged about it on Jan. 27, 2011, as a caller to the Paul Finebaum Radio Show. Updyke would eventually plead guilty to one count of unlawful damage of an animal or crop facility and sentenced to six months in Lee County jail. Along with his jail sentence he was also ordered by a judge to pay $800,000 in restitution to Auburn University. The university attempted to save the trees, but had to remove them once it was determined they would not survive. Two new large trees were planted in 2015. The oak on Magnolia Avenue didn't survive the move, so it was replaced a few months later.

Auburn’s horticulture team went to a nursery in South Carolina that had 10,000 live oak trees and transported five trees for the new corner in February 2015.

This August, Gary Keever, professor of horticulture at Auburn University, deemed the new trees healthy enough for the tradition of rolling the oak trees with toilet paper to restart.

"We are still conscious of making sure the trees stay healthy," Keever said in a university statement in August. "We also have water systems in place below the trees and even water pipes to the top that we need to protect. The toilet paper will be removed by hand after each rolling."

After the 51-14 victory over Arkansas State on Sept. 10, Auburn’s first win of the 2016 football season, Auburn head coach Gus Malzahn and his wife Kristi participated in the first rolling hours after the blowout victory.